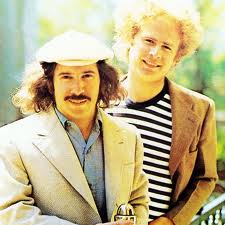 I’ve had this problem, one that started early into adulthood. The problem is that there is music I love that I cannot bear. Be it in the background at a supermarket, on the radio, with friends, on my own, this music always brings me to tears. Not tears due to the content, it’s something else, something that is so deep in me I never could quite pinpoint it. It’s not a feeling I have about anything else, no matter how much I love, have loved, or how terribly important it has been in my life. It’s Simon and Garfunkel. I have not even owned any of their albums on CD, as the music they made began stirring me to tears way back in the days of vinyl. Why?

I missed the sixties, they were before my time, but I did not miss the aftermath, the music was still in the air, there were still hippies about, still daisies, fantasies about California sunshine, a feeling of brotherhood, and big promises, though I think around the eighties we all knew that all this was slipping away. See, when I was a kid, terribly young, I lived down a dirt road, Peck Road, in Akron Ohio. We couldn’t really see our neighbors, and there was a pond, a swamp, in the backyard, and it was all a lot like where and how I live now, as I am starting over. Sometimes my life has a bitter-sweet way of coming full circle. The sun shines, the light shimmers off the water, the air is fresh, and I can’t see my neighbors, but there is no innocence left in the air. I am not 3, and Bill Withers is not charting hits anymore, not reassuring us that we have someone to lean on when we’re not strong… another song I cannot bear without crying.

Down the dirt road we’d go, I remember passing the park kids having mud fights on clay mountain, and I couldn’t wait until I was old enough to join them. Barreling down Peck Road I’d stare down at the floor of the old beater my dad’s friend owned, Johnny Cash in the background, and watch through the hole in the floor as the road rushed under the car. The world was full of that kind of magic.

On the weekends my dad would have all the kids over from the park where he worked, and the whole event, every weekend party, was filled and flooded with all the promises the Summer of Love had left in its wake. Wild things were happening in our backyard, teenagers and college kids from the park were at our house building fires, holding unfurled Queen-sized sheets over the fires until they ballooned and took off, floating high and hovering like ghosts. One of the ghosts caught fire, and I’ll never forget standing at the window, barely able to see over the ledge, as the sheet rose, brushed into the trees… and the leaves caught fire. And all the while music blared from our little house, a soundtrack to the last vestiges of that era, George Harrison’s “All Things Must Pass,” the music of Simon and Garfunkel, all of it so rich, so loaded, so powerful. How could I accept anything less than that, as THAT was the profoundly spiritual music that imprinted on my young heart and mind. See, that’s why I couldn’t possibly give a crap about Rhianna, I was immersed in deep water as a kid, so deep.

“Time it was and what a time it was,
It was a time of innocence,
A time of confidences.”

I found a frog, a bloody mess of a thing. I was a barefoot girl then, and my mother took hold of it and walked it to a safe place in the garage, and she warned me that it was pretty bad, a snake had gotten a hold of it. I stood quietly as she set the frog in a safe place, did all she could. I checked on the frog later, it was gone. Of course, in my mind, it was all better and had bounced off, back into the swamp. Everything was going to be fine. And I was going to grow up and inherit a world full of healthy frogs, harmonies, flying sheets, kids from the park, Simon and Garfunkel, George Harrison, joy, sun and hope. I couldn’t wait to grow up, pull on my very own patched bell bottoms and run barefoot into it all.

But it didn’t work out that way. The eighties came, and I started to realize as I matured into a world full of shit like AC/DC, Judas Priest, the J. Geils Band, and Punk Rock, that something had gone wrong, that I didn’t fit in and I didn’t know why.

I returned to our house on Peck Road once, years, a decade after we had moved away from that magical place. My dad took me there when I was late into my teens. The house was a wreck, no walls, smashed-in windows, graffiti on all the walls, bottles smashed all over the floor, and I went back to my basement room in the suburbs of Stow Ohio, shocked, my mother saw the wide and sad-eyed whiteness on my face. I was devastated to see my childhood home, a place that had been so full of hope and dreams, destroyed, useless, nothing. In despair, home, in my room in the suburbs, I turned on the Beatles and tried to forget that they “sucked” (as all the kids in Van Halen shirts had been telling me), and tried to forget about Peck Road, the park kids, and Simon and Garfunkel.

It became impossible for me to listen to Simon and Garfunkel without weeping. I still can’t. I’m tearful now as I play the first CD by them that I’ve had the courage to buy and play EVER. I can’t bear it, I really can’t. For years I thought the problem was that I missed Peck Road, the park kids, my youth. Then as I got older I figured that Simon and Garfunkel brought me too close to those memories, and that caused me to pine for my innocence. That was what hurt, the loss of my innocence, that was why that music was so painful… right?

Of course as the years rolled by I realized that I hated my father, the way the world viewed my art and music, and the ghetto I lived in, and I felt more and more apart from the world in which I lived. So the world moved on and as I became disinterested and indeed contemptuous towards the new things, Grunge, Rap, Modern Country, first-person shooter video games, I began feeling all the more like the loner I never wanted to be. But, when you don’t fit in or understand your time… what choice do you have but to conform… or… retreat.

Today, listening to a Simon and Garfunkel album for the first time since childhood, crying, I realize why I can’t take it. It’s ’cause they remind me. They remind me with every note that all my childhood dreams were misplaced. The world I believed I was going to grow up and inherit as a child is not there, I’m stuck in this one. The promises the tail end of the sixties experience made to my young self were not fulfilled. I didn’t inherit a world full of “All You Need Is Love,” “Lean On Me,” “Bridge Over Troubled Water,” “Uncle Albert/Admiral Halsey,” and “Smile On Your Brother.” Hoolihan and Big Chuck are gone, so are bell bottoms and pretty paintings of barefoot girls riding bikes surrounded in golden light and good vibrations. No, there’s no place for me in a world full of tattooed baddass bald guys with attitudes bickering on “reality TV” shows, Fox News, Taylor Swift, or the Smashing Pumpkins shouting at me that I’m just a rat in a cage. Which I’m not!

I don’t know what went wrong, or when it happened–but I’m willing to blame the eighties. I’ve often said that Ronald Reagan killed the last barefoot girl. Sure, there are good things going on, good vibrations here and there if you look hard enough on YouTube, but let’s face it, the good vibrations are NOT in the air anymore, not as the golden thread that runs though pop culture, not the way it was then, not in this culture so mired in cynicism. This is not the world I was promised as a kid, and I’m pissed. I feel robbed, and listening to Simon and Garfunkel just reminds me of it, of what I think is more of a failing of our society and our world than a failing of mine to accept the shit I inherited as the hippies sold out, bought Purell and became scared of terrorists. They had the chance to keep it up, but so many of them moved on and bought houses in Stow Ohio. In the end, I’m not so sure I ever lost my innocence. I know now that this world has lost its innocence, and THAT is why I can’t listen to Simon and Garfunkel, they bring that home to me hard.

But there’s hope, there’s Gainesville Florida, SAW, my beautiful room on the lake, Joe Courter, Florida Sun, my determinedly barefoot life, and so many other beautiful things. And there is hope in Hinduism, a religion that teaches that this world we call “reality” (reality, the only word that should always have quotation marks around it as Nabakov said) is all an illusion anyhow. Well, if you want your illusion full of reality TV, Techno/Industrial music, Rap, American Idol, cynicism and terrorists, enjoy, but I’m choosing my illusion.

And as for me, I’m Homeward Bound, where my love lies waiting silently for me.