I’ve been asking myself why I haven’t posted a “review” of Paul McCartney’s latest album… “NEW.” My answer is rather complicated, and requires a little foundational understanding. See, I believe that the process of making art is shamanic, the purpose of making art is shamanic, sacred, therefor artists are shaman. Great artists, masters, are of course sacred, perhaps almost luminous beings. They are beyond the words, or even understanding, of the average man (or woman), especially beyond the understanding of critics and their silly little “reviews.”

Besides all that I simply feel that the act of being a critic is immoral, an act of vandalism, and the words of critics, and the act of allowing critics to be of any importance at all, merely drags art into the lowly gutter of the common man. By their very nature critics take the pearls artists cast before swine and bury them in the slop… thinking themselves and their foolish little opinions of great import as they muddy the pearls. It’s rather grotesque, actually. 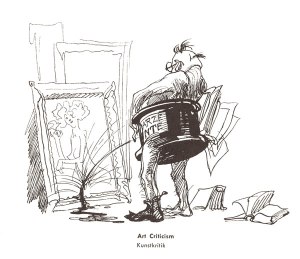 Looking through history at the hilarious wrongness of the words of critics when discussing masterpieces has taught me that the mere existence of critics is not merely immoral, but annoying. They are rather like flies buzzing around a picnic. Problem is, we can’t just put out critic-paper, get a bunch of ’em stuck on it and throw it away… they are slightly more clever than flies. So, let’s look at that… we have immoral cretins (critics) getting their filthy shitty bug-legs all over the golden works of masters. Who needs it. And while I’m onto “who needs it,” well, I know I don’t. I don’t need some critic to affirm or challenge what I know… they know far less than I. If critics really knew anything about music they would be musicians, if they knew anything about writing they would write… so what the hell are they, and what hell do they do anyway? In the words of Hans Christian Andersen… they do “nothing.”

Of course I wouldn’t have written a critique of McCartney’s latest, I would have written an exploration, an appreciation… I would have written questions for myself to answer as the album and its songs revealed its secrets to me over the coming years and decades. I will say, the first time I heard New I wept, and always at the same point… and wept the second and third times and beyond:

“May sweet memories of friends from the past,
Always comes to you, when you look for them,
And your inspiration, long may it last,
May it come to you, time and time again.”

What a divine and eloquent blessing for him to bestow upon his fellow artists. Yes, I wept, and wept that he was speaking so emotionally through the rest of the song about how people have tried to remove him of the credit he is do, and I wept into the next song or so in gratitude that Paul McCartney is still out there being so beautiful.

I have learned, personally, that many of the albums McCartney has created that I didn’t like, or dismissed, when I was young were simply over my head. Unfortunately when it comes to McCartney his albums have been over the head of the entire culture… and truly ahead of their times. Lots of artists are purported to be ahead of their time by critics, but rarely are they more than five or ten minutes ahead of their time. McCartney has at times been decades ahead of his time. In other words, it wasn’t that some of McCartney’s albums weren’t up to my standards, as time has rolled on I have realized that it was quite the opposite: I was not up to McCartney… he was dashing ahead and figuring eventually we would catch up. Well, I have. Time will make this all the more evident, trust me on this. McCartney is a master, and few masters walk the earth at any given time, plenty of great artists, a few legends, but precious few masters.

There is only one way to approach his latest album… with an awareness of his station. His album cannot be listened to with dismissive ears, with ears searching for the flaws, with petty little presuppositions; no, the album needs to be approached with respect, as something to study and learn from, as something that has something to teach, as the work of a master. We must bow before it, in the Hindu sense, as we bow before the ones we respect and love. McCartney is a master, and the works of masters must be approached with humility. To approach the work of a master as if we knew something he did not, as if we were somehow too smart for him, simply doesn’t make sense to me.

I also haven’t discussed the album with many people because I do not want to discuss it. In the past I would get excited about an album and try and get all my friends to come over for a listen… not anymore. If they are to discover the album, it probably won’t be through me this time. See, I don’t want to get involved in a conversation with someone for whom the album is just another pop album. It isn’t. We shouldn’t be comparing McCartney’s latest to Pearl Jam’s latest. There is no comparison, they are not on the same plane of existence. I don’t want to have to defend the album, defend McCartney, defend or explain my views. I just want to enjoy it in an isolation chamber.

If someone gets it, gets the album, gets the respect required to approach this work of art, then I would enjoy THAT discussion, otherwise… I’m putting my headphones back on, thank you very much.

What do you call a thousand critics at the bottom of the ocean?…

(To read the entire Hans Christian Andersen story “Something” follow this: http://hca.gilead.org.il/somethin.html)