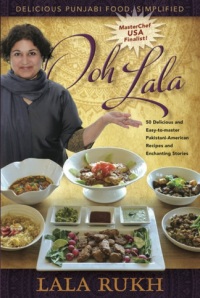 We all know I’ve already written a piece on my embarrassing encounter with Lala Rukh… so, since I’ve already eaten that crow and offered that apology publicly, let’s talk about something not only more positive, but something that benefits Lala and her lovely book.

For a long time now I have been suffering a minor, let’s say, lack of interest in things. Primarily a lack of interest in anything that required a lot of work on my part for a big gamble on a little return. Nothing quite takes the fizz out of the joy of playing guitar like a few gigs in sports bars. Nothing quite takes the joy out of getting your work published like say… nobody bothering to buy or read it. In the aftermath of that joyless defizzing there came a burning desire to do nothing at all.

I have been at a crossroads between bitterness and boredom. One thing I know about myself is that I am not happy unless I am learning, and for many years I learned to draw and learned to play, sing, and write songs. The desire to do those things has diminished, but my need to learn things and be productive had not. Combine this with my rather lackluster skills as a cook. I eat healthy, I cook the things I cook very well, but I never use recipes. I really don’t experiment beyond variations on dishes I already know, but I have always fantasized about learning to cook food from India or Pakistan. The problem with cooking that sort of food is… I was intimidated by the complexities of it all.

Now… mix all that together.

Essentially I needed something productive to do with my time, and since gigging in sports bars and creating ill-conceived esoteric erotic comics that were double-bagged but never read no longer holds any appeal for me… I was out of ideas, until Lala’s lovely book came into my hands. I can say without hyperbole that this book changed my life. Not only has it given me something worthwhile to do, it has finally gotten me over my fears of both cooking in general… AND cooking this favored ethnic cuisine! Her book made this food approachable. Yes, her book has literally been life changing! I LOVE food from this part of the world, and being able to fearlessly cook my own has been a blessing on so many levels… heck, being able to cook anything from a recipe has been a blessing… and ALL thanks to Lala!

I have cooked 4 dishes from her book, and have been as satisfied with those dishes as any song I ever wrote or any page I ever drew. Actually, more pleased, as NOTHING about the results of this food were disappointing… unlike the joy of performing in front of a group of people who would really prefer watching the Cleveland Cavs game on TV… cooking this food had only upsides. The biggest upside was that I got to eat every single bite of it. Yum! So much better than working my way to obscurity and poverty through “labors of love.”

She breaks the recipes down into things that are approachable and completely understandable! There is no guess work, no confusion, no unnecessary complications, nothing but delicious and perfectly spiced foods! Quite honestly, the food I have made myself from her book has been better than most of the food I’ve had in Indian restaurants… except perhaps for the restaurant “Chakra” (which actually served food from Pakistan) that I used to eat at in Korea, though I might actually attest that her recipes are every bit equal to the food served there.

Take, for example, my most recent meals, which consisted of potato ryata and chickpea curry. Not only were both recipes delicious and a breeze to make, they made so much food that I have been able to eat meals from what I made for 5 or 6 days! And all for so little work! Beyond that… there is quite literally nothing in the world I would rather eat than this ethnicity of food.

Dear Lala, well done! Really well, done, your book has not only enriched, but revolutionized, my diet and my life… and I’m not sure one could ask for much more from a cookbook.

Check out her book, “Ooh Lala,” as well as her website http://www.lalacookspunjabi.com