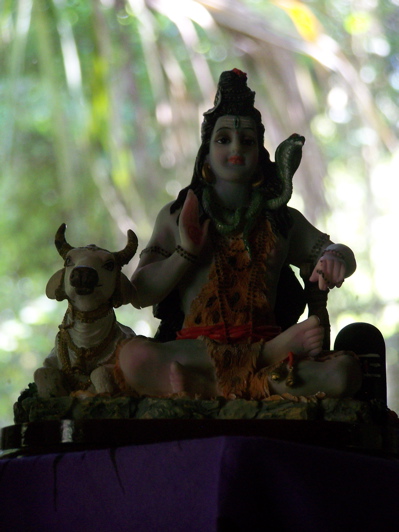 I was surprised, once I laid the strong emotions I had been clinging to at Shiva’s feet, how hard it was to let go and leave them there. Now, a week later… I feel lighter! In fact I feel more like I did when I first discovered the Hindu Temple in Cleveland. Lighter, less… well… attached. Less attached to anxieties and hurt.

So well has this gone that I have taken to keeping an attachment journal, which I keep at my altar, and today I went so far as to do a spirit drawing, just letting my hand move with love and quiet and not bothering to worry about the anatomy or end result. It was the process that counted, and I will not share these drawings, that is not what they are for.

The next attachment I am working on is politics, the foolish world of politics. I want rid of anxiety over it, rid of the alienation I feel from both sides, rid of ALL emotional reaction to politics, release from the endless, relentless, self-righteous barrage of hypocritical knee-jerk party-line political crap surrounding all of us, engulfing all of us. There are no real solutions or significance in any of this. It is madness… complete madness on all sides. And I want no part of it. Our culture has become sick with it, obsessed with it, 24 hour a day news channels, perpetual information on the internet, statements, comments, arguments, delusions… madness. Madness and utter and complete bullshit. I wish people would just watch the 6:00 news and shut the hell up about it after 6:30… like they used to… and I would like to thank Joe Blue Sky for that observation.

I think you can see by the above paragraph that I have a long long way to go before I will be free of this jumble of venom and toxins. It seems I have been infected with this malady myself. And as much as I have perhaps been too strong in the above paragraph, I think the recoiling I am experiencing, the reactionary revulsion to politics, is merely that… a reaction to the relentlessness of it all. The topic has grown too big by far, and is ravaging us at every moment… but only ravaging those who let it. I have let it. I won’t let it.

And why do I think it’s OK and a perfectly responsible thing to walk away from politics? BECAUSE THEY DON’T NEED ME out there adding to the shouting, the noise, the clamor, and yes… the madness. There are too many people far too fixated on this insanity… they do not need me. I renounce. And I think that the problem now is not apathy, it’s the opposite… far too many people are far too angrily fixated on politics… it’s like a disease. And get this… I actually believe we’d all be better off and there’d be less gridlock if far fewer people were so fixated on all this, and instead took their hands out of it, and busied themselves with other things. Maybe it’s just me after all… which is another reason to renounce. And perhaps most importantly, the world needs more people who really don’t care what side you’re on. I renounce.

And by Lord Shiva, I will not be shamed, argued, or scolded by myself or others into participating in this illusion. If this makes me apathetic… it is either apathy or anger, rage, and anxiety. Given the choice…

By Lord Shiva’s grace, I for one will be free.