Mercy! I’ve always looked back, never once felt in-step with my time. Even in high school I was surrounded by enthusiastic lunkheads in J. Geils Band and Def Leppard T-shirts telling me the Beatles sucked. Well… I knew better, even at 16, I knew better. Frustrated with trying to get them to see the light, I ended every confrontation with, “Talk to me about this in 2o years.”

Well… I, of course, was right. Those flashes flashed, the pans are rusting to nothing in landfills. Since those days as a teenager I realized that “This stuff is shit.” It’s still shit. I feel the same way today, whether it’s Lady Gaga, Little Wayne, Smashing Pumpkins or whoever. So I kept looking back, seeking, finding, and knowing every time I get or got stuck listening to stuff from the here and now that… this stuff is shit… too. Oh, sure, I know there are good people out there making great stuff–some stuff I really love, by the way. But it’s not as relevant, vibrant or powerful as what I’m hearing right now! Pardon my enthusiasm, but what I’m hearing now is spectacular… even the clarity and sonics are great! 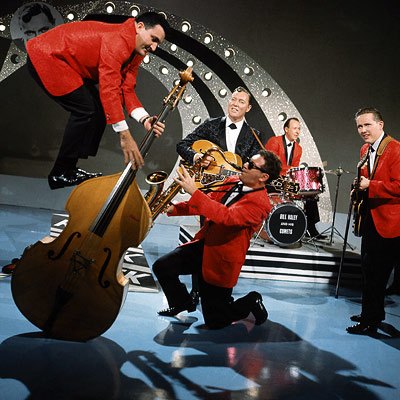 Today, desperate for something else in my collection, something different to listen to, I picked up a “Bill Haley and His Comets collection.” This stuff is hot. Haley and his band knew how to swing. The energy level is mind-blowing… and all done without a dash of anger, cynicism, distortion, or worthless intrusions from computers.

Men playing hard, swinging, rocking, and confirming that there was nothing new about Punk either, let alone metal. No sir, this stuff is high energy, genuinely intense… ELECTRIFYING! The solos, guitar solos, are wild, truly wild. The drum intro. to “Birth Of the Boogie” alone should fill metal enthusiasts and Punks with a sense of shame. No, it hasn’t been done any better than Bill Haley did it, and that’s a fact. Listen! It’s all there, it’s all there!

As for me, tonight, Bill Haley’s rocking this joint… and after that, who knows… Gene Vincent? Oh yeah, that would be sweet!

Well, kids, this is why I spend so much time alone. I just don’t get what everyone’s all on about. Give me Bill Haley, Jimmy Rodgers, Gene Vincent, Wanda Jackson, Link Wray, Hank Williams, Louis Prima, Duane Eddy, Barbara Pittman, Carl Perkins, and I’ll go with you up to the Beatles, but after that… I’m looking back, way back. And I really don’t expect anyone to join me, I’ve accepted that I’m taking this trip alone. Yep, just me and the Beatles (and Bill Haley), and if people still think I’m wrong… we can talk about it in 20 years, if anyone still remembers what everyone thought was better than the Beatles or Bill Haley 20 years down the line.

Of course, I don’t expect many to agree, so in the words of the poet… “Farewell, So Long, Goodbye.”