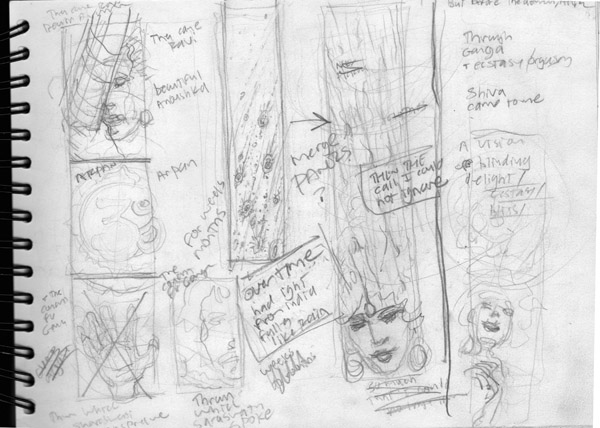 By this point I knew where this was going, but am confused upon reflection as to why the page below still has the wrong central panel. Notice again that at this point I was still thinking in terms of breaking up the panels on the left into three panels. I am fairly certain that this is the first sketch for this page, but the one below may have come first. 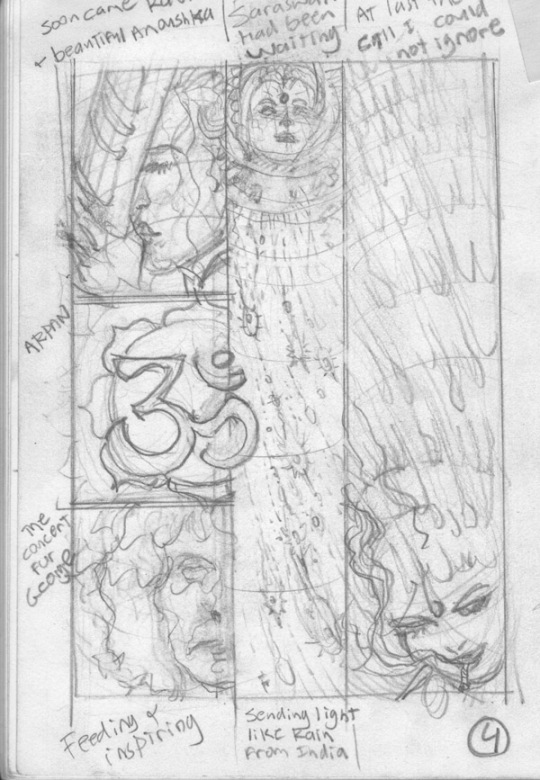 The sketch here is fairly tight right down to the details. The Yantra is there but still not as strong as what I had established earlier. And you will see that Saraswati is still in the second panel rather than in her proper place on page 2. 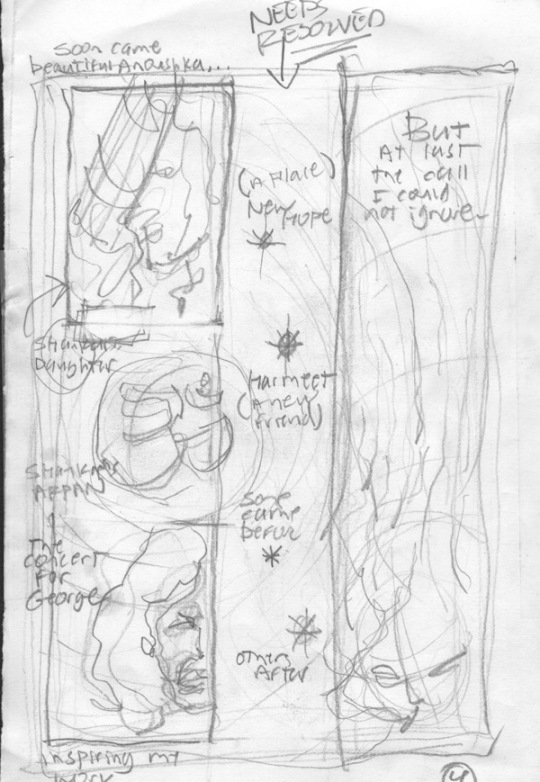 By the time of the “ashcan” I had figured most of the important elements out. No Saraswati here, and the left column is still broken down into three panels. 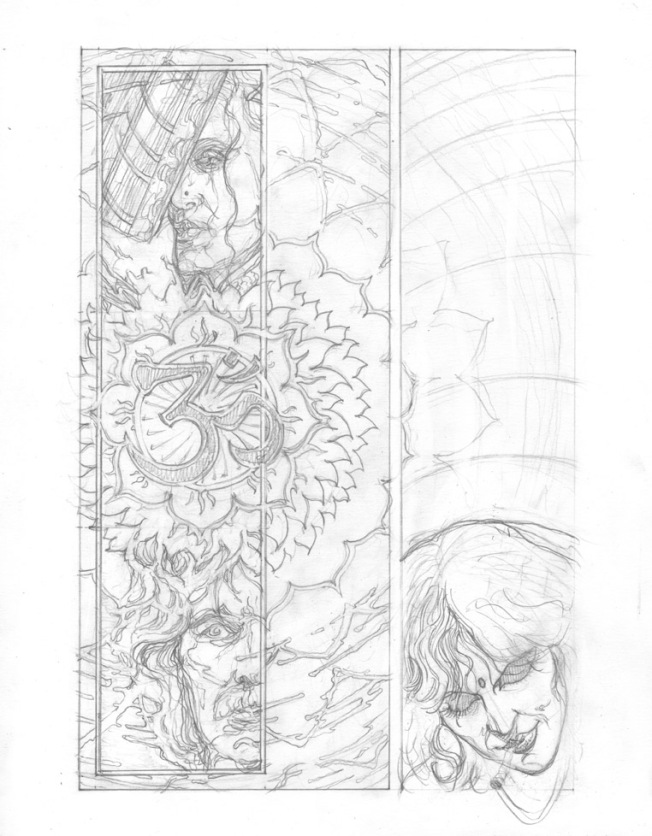 Tom chose to scan the final (though still in need of inking) page 4 in progress. I have finished the pencils since taking this scan and will soon upload them but you can see that the third (right) panel is very unfinished and the middle section is also not quite there. Note that the Yantric element is strong throughout and once again it wasn’t until the final piece that I figured out that the left panel needed to be one long continuous panel and not three smaller ones. And like page 2 with the void and the crowd, I merged the panels into 1 trippy whole. The finished pencils will be uploaded soon, and the inked pages… one day when I finally finish. There is also one more page in this 5 page story, so keep coming back for that as well. 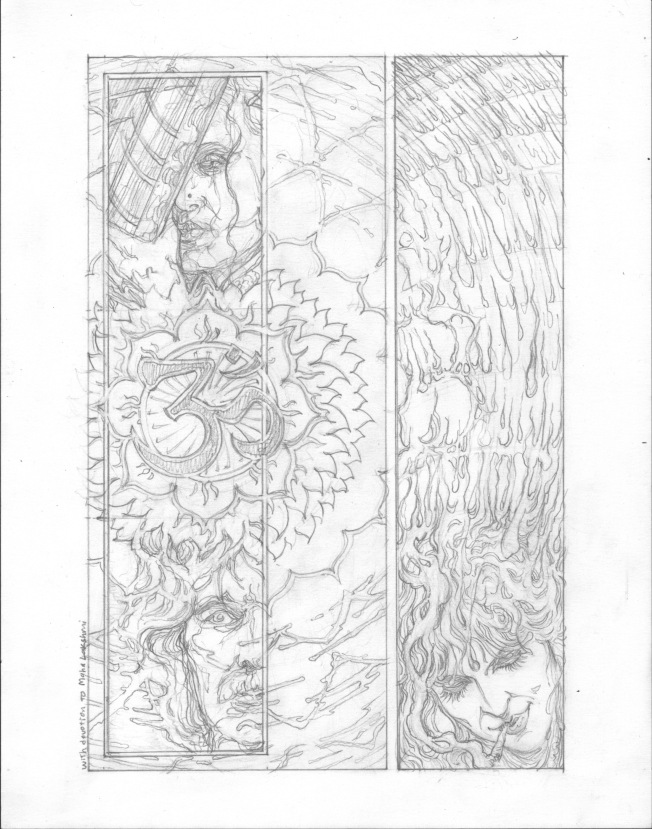 As promised, here at last, is the final (uninked/unfinished) version of this page. You can see from the page above that the piece was not quite complete. It is much more magical now. So… the next phase… I have to get up the courage to finish the fifth and last page… then INK these! 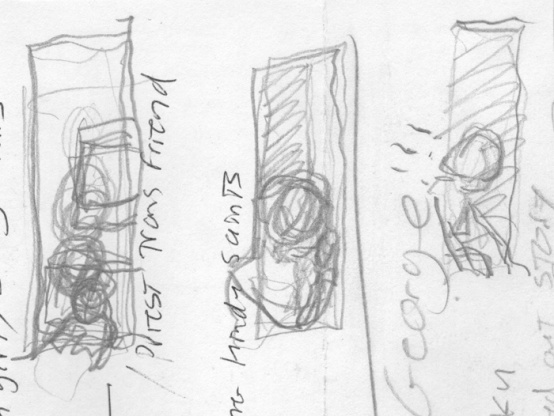 OK, I have to confess that the development of this page was such a cluster-fudge that I really wasn’t able to plow through all these sketches and figure out which thoughts came first, so the chronology is based on my best recollections. I do know that the above sketches are the seed sketches merely by how simple they are. At this point in the story I was dealing with the emotional darkness that came over me before the Gods (I assume Shiva, primarily, for a number of highly personal reasons) chose to reach out to me. In the above sketches I am seen in sadness in a hotel room. 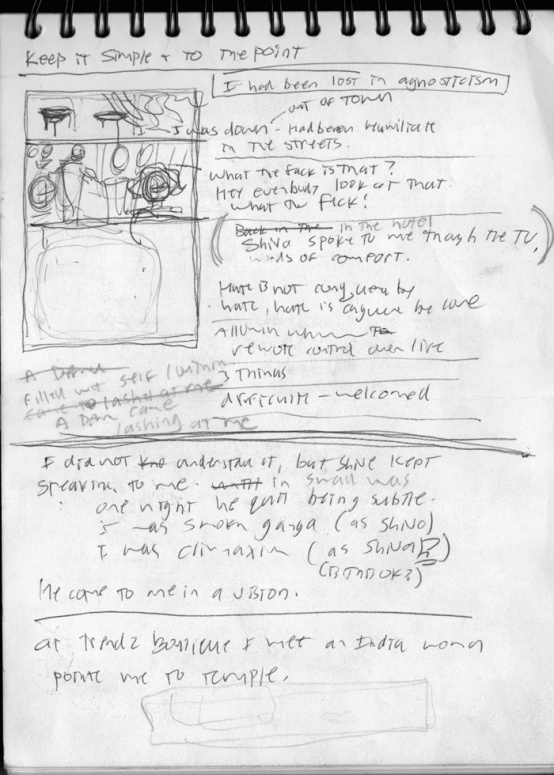 Here you can see that the above sketch (seen earlier) deals with this emotional moment but was drawn before the strong verticals were established. 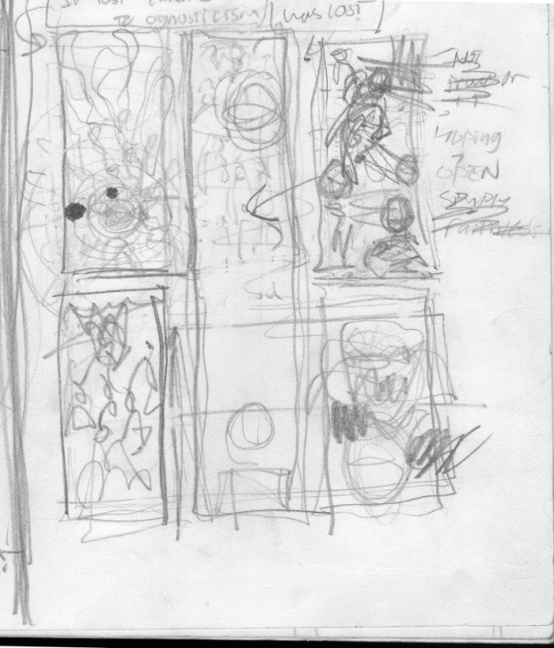 Here the primary action, the taunting of the demon (actually, speaking through some asshole in Toronto) was appearing on the previous page. 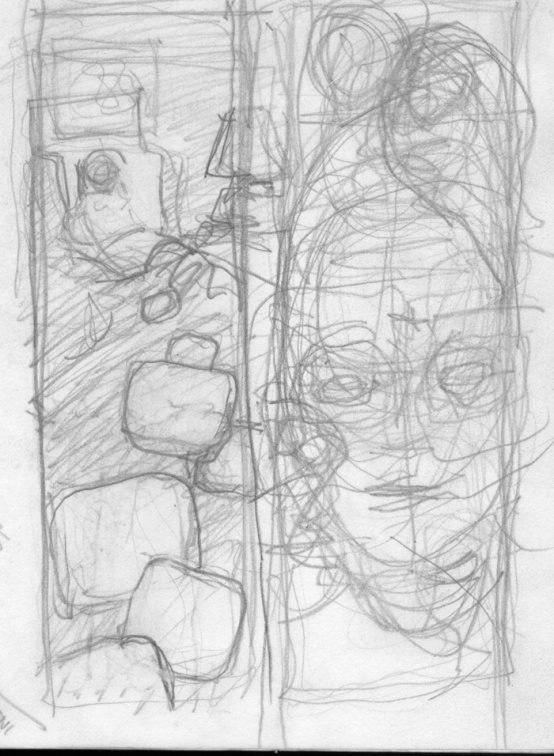 By this point the strong verticals are clear, and the spirit of Shiva is there, but I was really still stuck on the idea that I had to show myself in sorrow in a bed in a hotel watching TV. 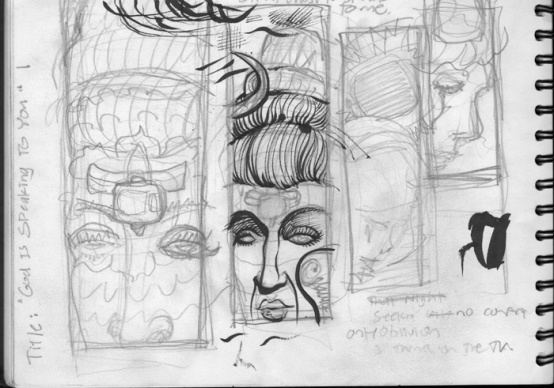 Here I am still playing with the same ideas, though the Shiva head is getting closer and the TV is now no longer his eyes but his third eye. I inked this sketch just to start to wear away some of the rust before I had to demo before students. 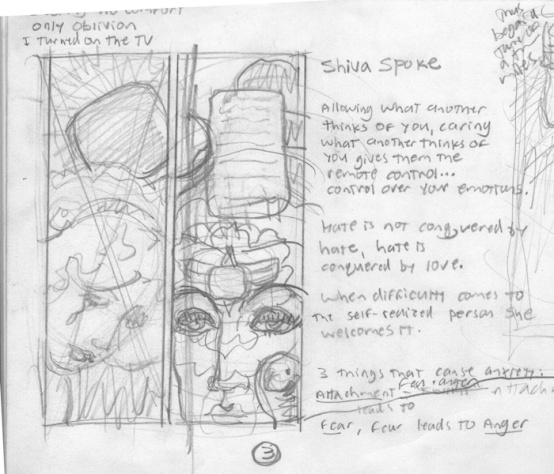 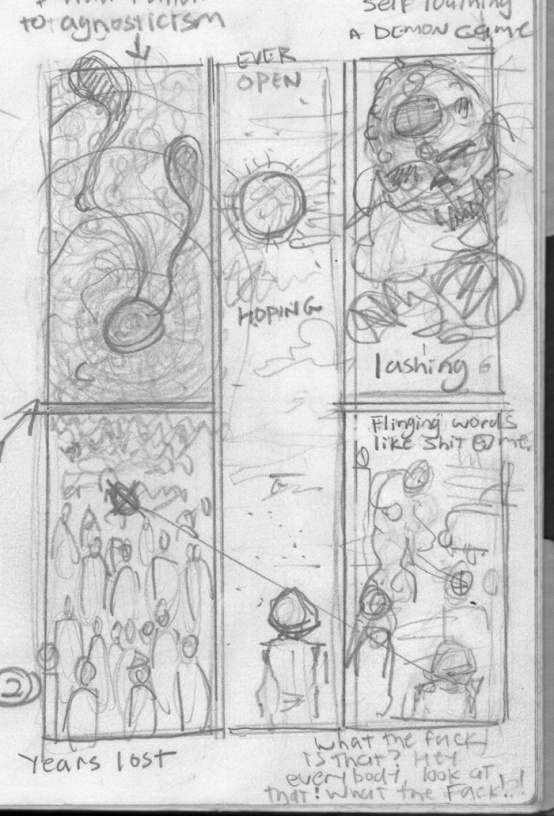 Still not there, still the demon is on the wrong page. But the diagonals are strong on the page as well. 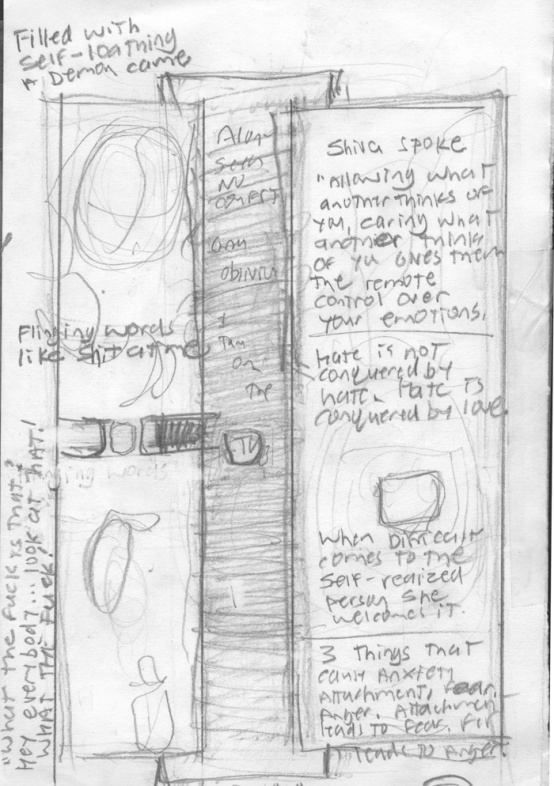 Here we have the final page layout, again worked up in the little ashcan Tom and I had talked through to work out the storytelling issues. All the panels are in their proper places and the strong top and bottom diagonals that cross the three panels are still there even in the new layout. The story works better when the Demon (the moment of crisis) is on the same page as the moment of redemption. Notice that the left panels are still broken into two rather than on strong single vertical. 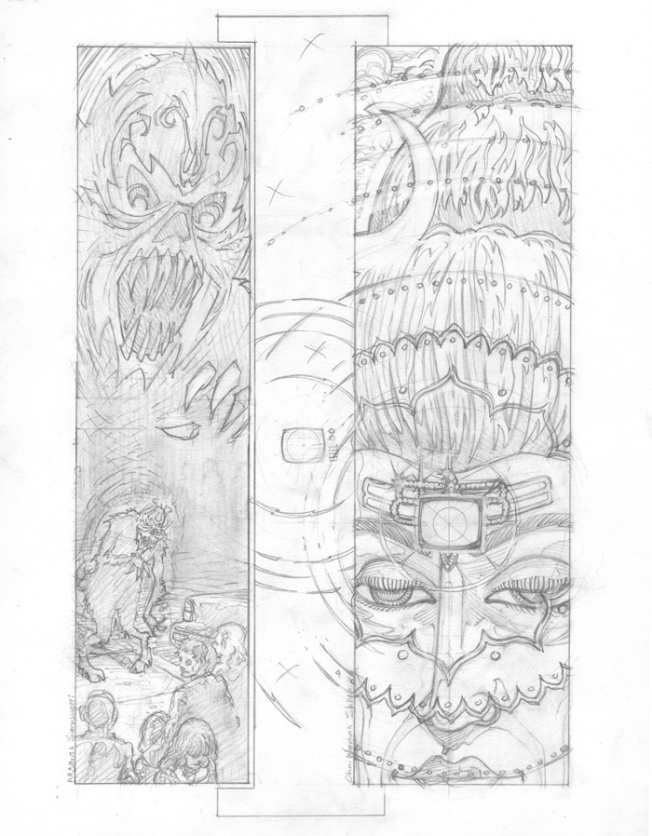 This, of course, is the final page, though still uninked–therefor unfinished. I again found a way, an inspired way, to maintain the Yantric element that has been an important part of this story arc. The Demon on the top left was a real struggle. I had worked, reworked, and erased myself silly. The first drawings seemed too rooted in the juvenile “bad ass” tradition of the old WOTC editorial mandates I had put up with for years. I am much more pleased with the mask-like solution presented. Watching me struggle with that single 3 x 3 moment left Tom asking why I didn’t just move on to another panel and come back to that. I told him that I knew the image was “in there” somewhere and I just had to keep looking until I found it. I did! Also, since this page will be facing the previous page I continued the diagonal that crossed panels so the viewer would be able to easily spot the little me in the bottom of the left-hand panel. Additionally, as with the earlier page, notice that the first panel is now one long unbroken vertical rather than two panels. Again, this solution came to me as I was well into drawing the final page. 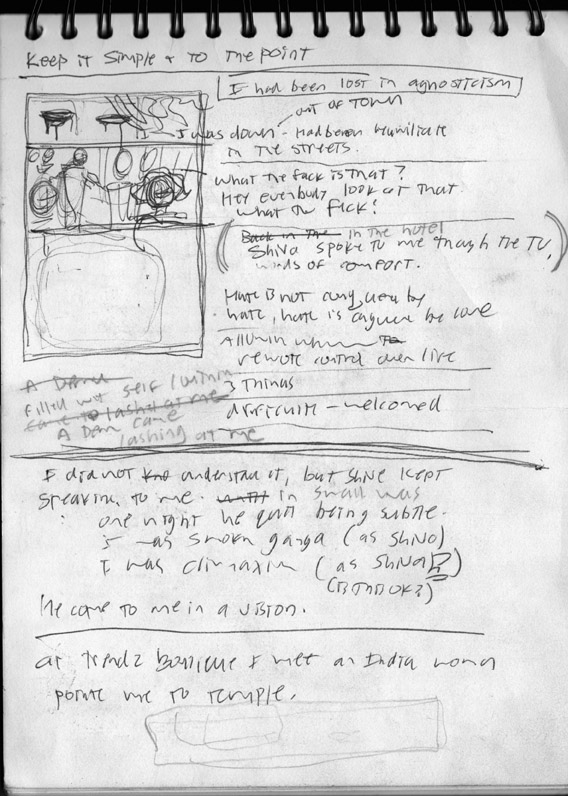 I started page 2 with much less certainty than page 1, and in fact at this point hadn’t even realized that the entire story was going to be laid out with strong vertical panels. This is something I try and teach my students–and you can see evidence of this here and a total contradiction of this principal in page 1–which is that they need to do many thumbnails and iterations as their first idea probably sucks or is at the very least more likely than not merely a half-idea. In fact, this thumbnail really only covers one idea from page 2, “I had fallen to agnosticism,” the rest of this page became page 3. 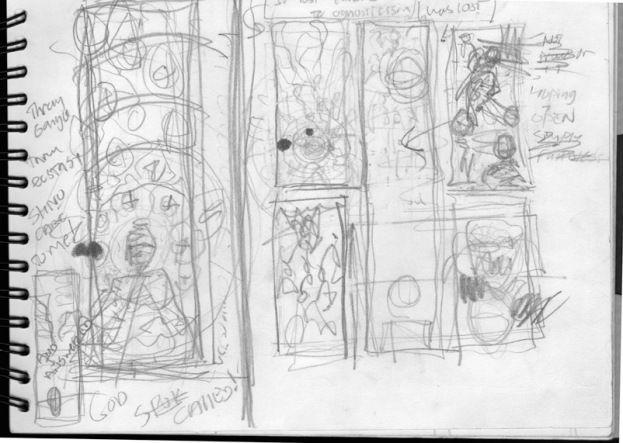 On the left is the image for page 5, on the right is the first serious layout for page 2. Here you can see strong vertical panels established, a layout theme that will repeat. Notice that the left and right panels are broken into two smaller panels. Additionally the two panels on the far right ultimately moved to the next page. 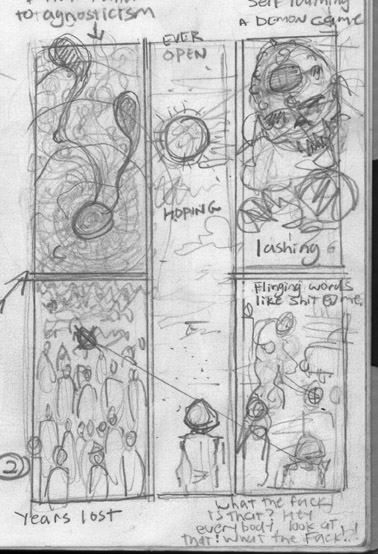 This layout is very similar to the above though by now I had realized the strong diagonal elements that would run across page, see the line across the bottom that shows that this strong diagonal would lead to me in all three columns. The three circular shape across the top do the same. 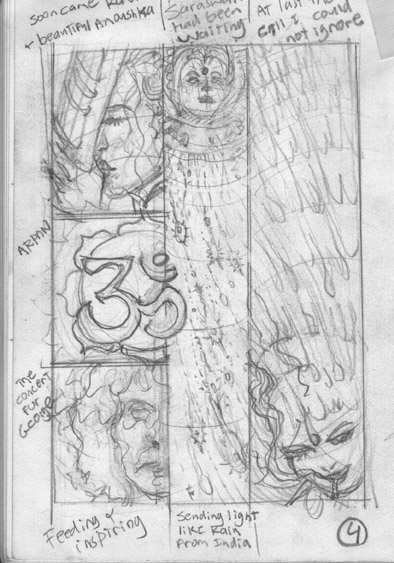 This central panel ultimately moved to this page while the other panels made up page 4. 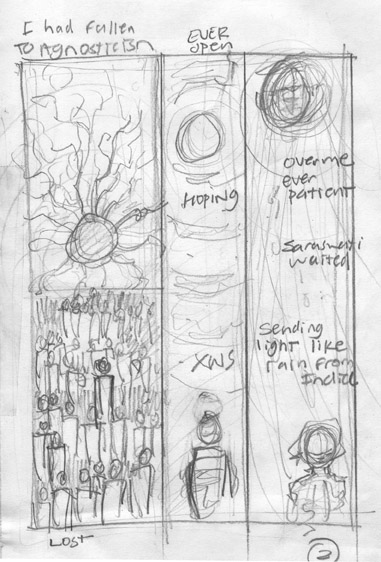 This, again, is from the little ashcan version of this that I worked out with Tom Hart at SAW, and in fact it was largely this page that caused me to need to create the ashcan to finally get all the right panels in all the right places on all the right pages.  The strong diagonals were important to me and you can see that I maintained them with the flow of images of me going downward diagonally across the bottom as well as the void, moon, and Saraswati portrait moving upward across the the panels at the top. You can see here that the column on the left is still broken into two panels. 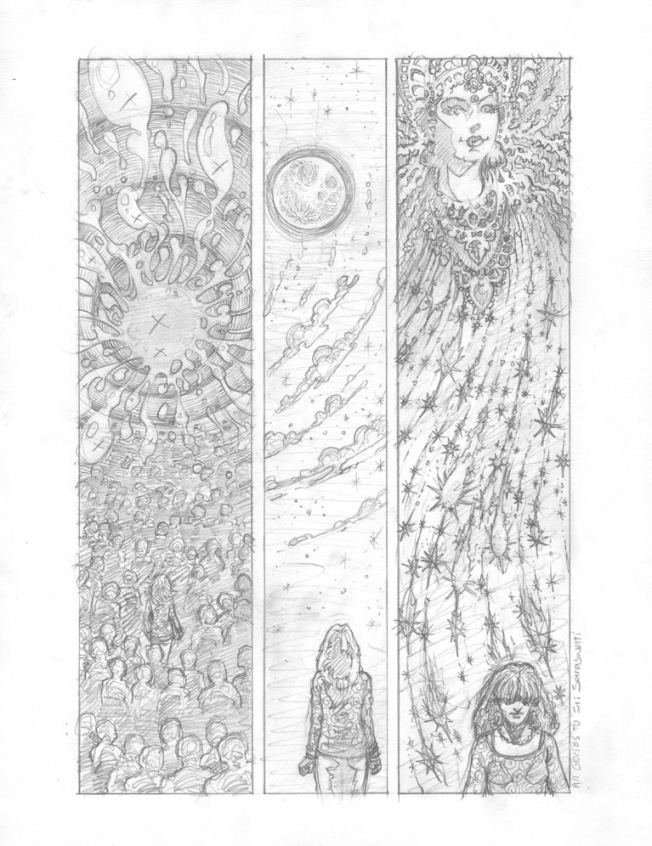 This is the final page, as it is still not inked it is nowhere near compleat. Here you can see the strong diagonals and also the Yantra-like repetition of the circular shape that carries across all three panels. This Yantra was now like the strong vertical panels, a consistent design theme that would carry through each page. Additionally you can see that ultimately I chose to let the first panel become one rather than two, an element that I had not even considered until I had started drawing the final page… though looking at it now it seems terribly inevitable. 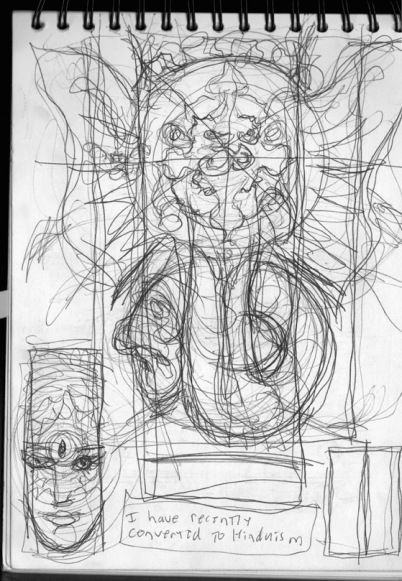 I have begun working on a five page story about my conversion to Hindusim. This particular story is very important to me and I have been intimidated by my responsibility to the subject matter so I have put it off. Then, one evening the first images and the themes and concepts that run throughout the piece came to me. Above you see my initial ballpoint sketch for the first page. On the right is me with a Yantra imposed over my face and on the left is Lord Ganesha, also with a Yantra over his face. Though I had not laid it out as such at this point you can see on the bottom right that I had known right from the start that this page would contain two strong vertical panels. 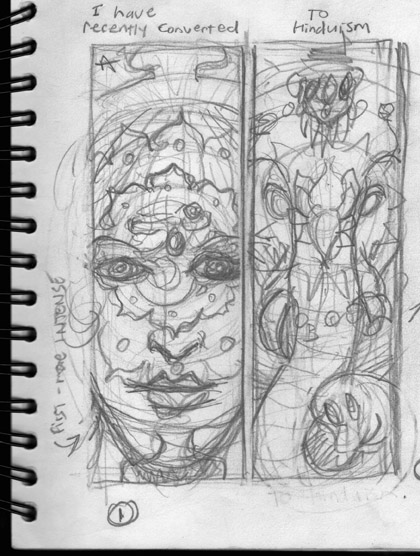 This second sketch  really captured the spirit of the story, and is unusual for me in that this second iteration is fairly similar to the first sketch. The Ohm symbol has appeared over my third eye. 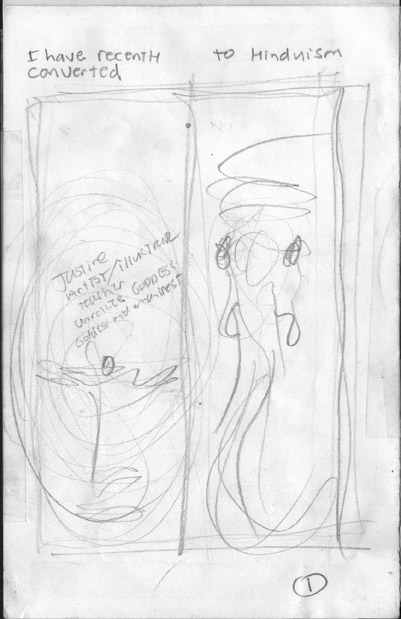 I discussed the entire layout of the story with Tom Hart because I felt that though the sketches and ideas were solid, the storytelling and flow were off. I created a small thumbnail ashcan in which I laid out roughs demonstrating the new placement of panels 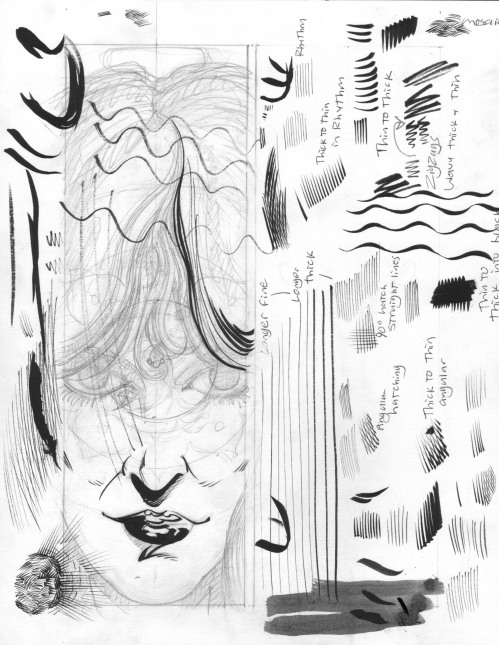 The above was my first attempt to work up the final page. This was when I realized that the self-portrait was not going to work under the Yantra rendered this way (plus, Tom said it looked like She Hulk) so I scrapped this page and went with the more graphic representation below. The crazy ink lines all around the drawing were done as a demo for one of my students. 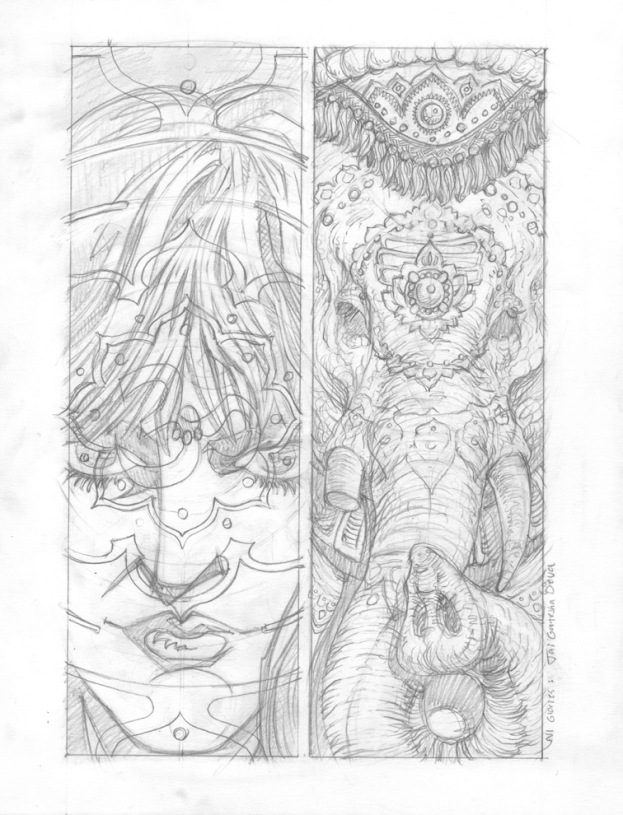 This is the final pencil drawing that will ultimately be inked–so yes, this is nowhere near finished. The one major dilemma I had in this piece was that my self-portrait needed to work under the Yantra. I had also decided by this point that Lord Ganesha’s Yantra would be incorporated into the drawing as if it were painted on him rather than imposed over him. Additionally I wanted Lord Ganesha to be drawn in a far more visceral and realistic way than myself, taking him out of the ethereal and stating to the reader just how real these Deities are to me… far more real than my own sense of self. It is also interesting to note that all of the finished drawings have been created in Gainesville Florida at The Sequential Artist’s Workshop where I teach and have access to studio space.