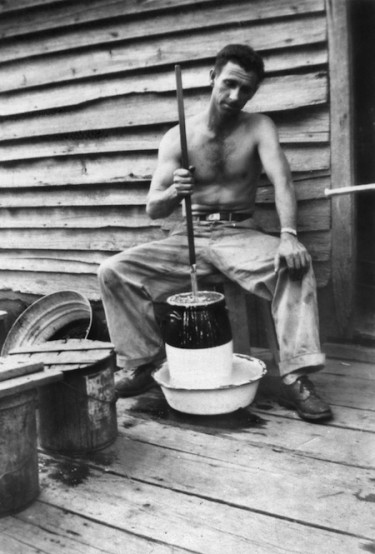 I was thinking back, and got really stuck on something that hit me hard.

When I lived in Korea, I wrote a song about my Papa McClain (that’s my grandfather, most definitely NOT my father). He had dementia, and, sadly, while I was teaching overseas for 2 years, I missed his last lucid years. Old Papa McClain was a true hillbilly, and as a teenager I remember being ashamed of him in his flannel shirt and that damn hat with the earflaps. It wasn’t long after that when I saw who the fool was, and I felt guilty about ever seeing my beloved Papa that way.

He and Grandma grew their own garden, and for years we ate nothing but fresh vegetables, and sometimes, venison. Papa would sit and eat radishes, he loved them, and would indiscriminately pepper everything on his plate. He loved black pepper, and I never saw him eat anything without peppering it first. Of all the Christmas gifts I ever gave old Papa McClain, it was the fresh peppercorn grinder I bought him for the table that was his favorite. He wasn’t much of a gourmet (see the radishes), but he damn well knew the difference between fresh ground pepper and canned pepper.

Writing that song and losing him to dementia was how and when I mourned. The song was all about what a great man he was. Sure, some might have said he was a dumb old hillbilly, but were I to have to survive, I mean really survive, I would have stood by my Papa before any of those intellectuals and professors who used to snort contemptuously at guys who used “seen” at the wrong times. Yeah, I seen my Papa build things from the ground up, from foundation to electric wiring and plumbing. We never had to have a mechanic, no one in the family did, ’cause Papa fixed all the cars. No matter what was wrong, he could fix anything. He once said about my other Papa, who was not so mechanically inclined: “Old Bob’s alright, but he couldn’t get his thumb up his ass with both hands.”

Once, when I was stranded dead center in the middle of Pennsylvania with a car with an oil leak, I called him, not my father. Papa didn’t think twice. Old Papa made the four and a half hour drive (each way), his toolbox in his truck, but when he arrived, popped the hood and looked at my engine, he didn’t need any tools. Papa looked at the ground for a minute, picked up a twig, reached in his pocket, pulled out his pocket knife, and he whittled out a little wedge, shoved it in my engine, and I drove all the way home without dropping another drip of oil.

When I wrote that song I talked about how when we were kids headed up into and around the mountains of West Virginia, he kept an old jug of water in the trunk. Poor old guy had to stop every twenty minutes for me and my brother. We wanted “water from the jug,” and dear old Papa would pull over and get out that jug. He had the patience of a saint, he always did. He was never in a hurry, and never got short with any of us. He was like a Yogi. In that song I also wrote about how grandma used to say, “One of these days he’s gonna put pepper on his ice cream,” and she waited for that day.

When I bought my house everyone said he was too old to help me fix it up, but we both knew better. I watched my Papa leap out of the back of his truck like a twenty-two year-old every time he had to load or unload anything from it. There was no one I would have put more trust in when it came to my house than my Papa.

As a musician I used to sit and listen to him talk about the songs he remembered from the hills. Papa was born in a log cabin, and that cabin still stood up the holler for most of my life. Beyond the “new house” and a few old Chevy’s that had been laid to rest out back, there was the old cabin, where it had been since the Civil War (if I’m not mistaken). I’d go up into the mountains with my Papa and watch him hunt. Yeah, old Papa, could survive. I once watched him shoot and skin a squirrel. That’s how you live through The Great Depression, you learn how to hunt, shoot and skin squirrels. He may not have known when to use “saw” or “seen,” but he knew how to survive, how to build, how to be patient and how to take care of people. I only ate squirrel that once, and I have to say, it’s an acquired taste. Anyhow, when he told stories, I listened, and when he talked about mountain music, I also listened. Any song or musician he talked about I wrote down, researched, and if it was a song, I learned it and played it. Once, before the dementia, out on the back porch at my mom’s house I got him to strum a few chords just so I could say I played with him. Papa loved the original Carter Family, A.P., Maybelle and Sarah. I learned how to play just like Maybelle, and so far as I know, was one of the few people around playing “Wildwood Flower” (Papa’s favorite song) the right way… Maybelle’s way! I learned that way of picking from a guy who had recorded with grandchildren of the original Carter Family, and when he taught me the technique, it was with one of Maybelle’s picks! When Papa had dementia, he told me for the first time that he knew the Carter Family. I knew he loved them, I didn’t know he knew them, and it wasn’t the dementia talking either. At that time he suddenly began playing his old harmonica. I had never seen him play much, if at all, but suddenly he was playing songs he hadn’t thought about for decades. Suddenly, here he was, a mess, but he could play those old songs and could remember that he knew the Carter Family.

All that harmonica playing happened after I’d come back from Korea. Here was this man who had worked all his life, who cared for others, who knew how to do things, and now this… he didn’t even know my name. It was devastating to know I’d missed the last lucid years of his life. We sat at the table, my ex, Papa, Grandma, and there was that pepper grinder.

Papa sat down to eat, and just ate.

“Papa,” I said, “don’t you want some pepper?” and I held up the pepper grinder. My Papa and pepper were practically synonymous, I’d even say legendary in the family. I figured, being in a state of dementia, he had forgotten, and he’d want the pepper once he saw it.

“Oh no, I’m alright.” He shook his head and went back to eating.

Time froze and tears welled in my eyes. I had to excuse myself to go to the bathroom and cry.

Grandma never did get to see him put pepper on his ice cream, and neither did I.